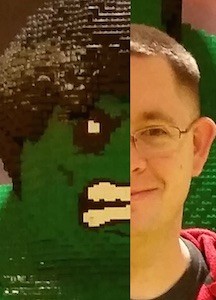 I had a small collection of comics when I was a kid that were unfortunately destroyed by a leaky roof. While my collection was gone, my love for the characters remained. I grew up on watching reruns of Batman and the Super-Friends. I proudly admit that in college I organized my schedule so I could be back at the dorm in time to watch Spider-Man and on a dare went to class in a Spider-Man costume and not on Halloween. After college, active duty military service took up much of my time, and didn’t leave space for comics, but when I got out, I returned to comics and the characters I loved growing up.

I started collecting again in 2007, first as a trade here or there, mostly Deadpool, a character that I first found out about playing Marvel Ultimate Alliance, but who makes me laugh out loud almost every book of his I read. Eventually I found Pittsburgh Comics and have made that a weekly (or more) stop. I am by no means an expert, but think I know enough to be dangerous. I was at one time only reading Marvel but have since branched out to DC and indie stuff. I am a big fan of the Punisher, Moon Knight, Batman, Green Lantern, and Spider-Man.