With Father’s Day almost here, I thought I’d explain how my store owes so much to my Dad.

I’ve told this story before, but I thought I’d tell it again.

I’ve been reading comics as long as I can remember. I see people showing their first comics. I have no idea. I remember getting a Werewolf by Night comic and it came out in 1972. So there is no grand “This was my first comics” story for me. I grew up an only child with trips from Chicago to my Grandmother’s outside Detroit. So lots of down time and comics got me through.

My mom’s best friend moved when I was under 10 and her 2 teenage sons left me all of their comics. A slew of Archies and Casper. A lesser slew of DC. Adams Batman. Adventure with Legion. Superman, Jimmy Olsen, Lois Lane. A little bit of Marvel but some gems like Amazing Spider-Man 28 and Avengers 57. So my love of comics started early. But collecting came later.

One of my grandmother’s neighbors had a son who also read comics. We would share. Somehow the idea of collecting came up. I distinctly remember getting a copy of Arak Son of Thunder #1 and setting it aside as a “collectible” (My decision making got better). I had a basic knowledge of Daredevil having a copy of #125 with the death of Copperhead from 1975.

One day Andrew showed me Daredevil #181. I knew Daredevil, but none of the other characters. But I was fascinated. So this would have been 1982. I was a freshman. I wanted to read this whole story. Well, there was no eBay. I didn’t really know how to go about it. I bought some Miller Daredevils from a classmate with lunch money. Then I found out there was a monthly convention at the Americana Congress Hotel in downtown Chicago. I begged and pleaded to go.

My parents took me. My mind was blown. I had only ever seen comics at 7-11. 14 year old me was in heaven. I still remember my Dad’s magic pockets, pulling out money when I ran out. Now this was a long time ago. I remember removing 25 and 30 cent hand written stickers off books when I was getting ready to prepare my books to sell for my first convention.

Well, I dived into this world. I loved the fanzines. I started getting Comic Buyer’s Guide. And I really started collecting. And part of collecting was lists. I used index cards. Writing down all of the issues in a series I wanted and crossing off what I had.

On the back of some action figure, there was a subscription form and I think I signed up for just about everything. I distinctly remember coming home every day from Jr High and eagerly checking the mail for the plain brown wrappers with my comics.

Well, my dad traveled a bunch for work. Mostly to Minneapolis. He found a comic book store there called Hennepin’s. Well, he would sneak a look at my lists and would come back with treats. Mostly Daredevils. He never read comics as far as I know, but this was a way for him to do this with me.

Well, one day he went nuts. During my sophomore year, he had a heart attack while my parents dropped me off at school after I broke my foot. My mom helped me into school and when she came back to the car, he was in the passenger seat saying take me to the hospital. (I was miffed I got no sympathy from family friends for my broken foot).

Maybe it was the realization that life was short. I don’t know. But one day later, after a trip, I came home from school to a treat. I opened the front door and from the foyer to his desk in the den was a row of comics laid out on the floor. Daredevils. Old Daredevils. All ones I needed. Ones I wanted but would never be able to get with my lawn mowing money. My mom liked to tell how I would say “Oh Daddy” as I picked up each one. And my dad was beaming. I slowly picked up each one on the way to his desk. They were laid out in reverse order. The last one was #2.

Later that school year, while I was in DC on a band trip, my dad had another heart attack that he did not survive. So I came home early. It was Spring Break. So I was home with a lot of adults. Lots of talking and I was in no mood to talk to adults. I was devastated. I was very annoyed about the band trip because it was the weekend for the Chicago Comicon that I really wanted to go to.

One of our family friends was also a comic collector. More highbrow stuff than me, Prince Valiant mostly. But my mom asked him if he would take me to get me out of the house. Away we went.

Well, I got a lot of great books I still have. ASM #129 for $2. Giant Size X-Men (and a reprint) for $35. But the 2 big books were from Ypsilanti Comics (yes, I still remember. I even went to the store on one trip from Chicago to Detroit.) I loved Neal Adam’s Deadman from his appearances in Brave & Bold with Batman. I picked up Strange Adventures #205 from them, his first appearance. But they also had another book. One I really needed. The last one I needed. To complete my collection. And to complete my and my dads mission. Daredevil #1. $50. I didn’t haggle. I handed over the money. Still the most I ever paid for a comic book in my collection. My mom thought I was insane paying that much money for a “comic book”. But she also knew how important it was. And, yes, I still have it.

So, when I say I have a Daredevil issue, now you know why. And why my dad, who passed when I was 15, is so very important to my collection and the store. 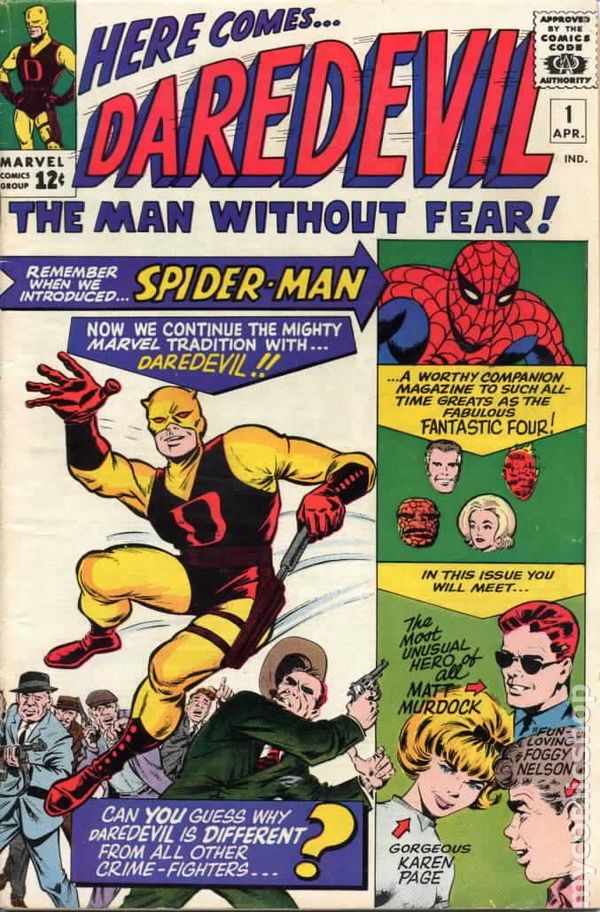