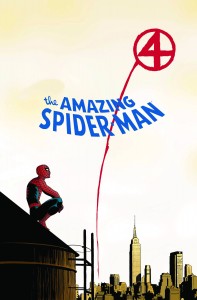 Spidey scribe Dan Slott takes a break from the “Big Time” storyline and explains how Peter Parker ends up joining the Fantastic Four.   This heart felt issue features Peter and the remnants of the Fantastic Four sharing some found memories about the late Johnny Storm.

If Marcos Martin would draw every Spider-Man issue, I’d be a happy young man.  For as long as I’ve liked comics, when I think of Spider-Man, I see the Martin Spider-Man.  Some might argue that Martin’s Spidey is antiquated and I am just being nostalgic, but I say this is the way Spider-Man was meant to be drawn.

In addition to Martin’s art, I also enjoyed the “memories” that were drawn by other artists.  My favorite was that drawn by Ty Templeton.  His Thing is very well done and the photo album-like splash of Johnny and Peter up to no good was creative. The other artists did a good job in bringing life to Slott’s story.

An emotional issue for sure; funny and sad at the same time, a true testament to Slott’s writing.  A must read for all Spider-Man and Fantastic Four fans as well as a good place for any new readers to give the Spidey/Fantasic Four universe a try. 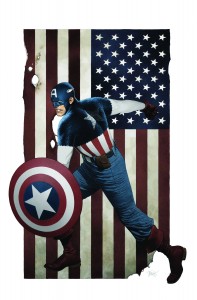 I can’t say anything bad about this issue.  The presentation of the issue was grandiose.  Big name writers and artists contributed to the giant sized issue.  I liked every story and I loved Union Jack’s appearance (I actually found his action figure at Target the other day…).

As for the current storyline, Bucky is in a Russian prison.  He is not well liked by the other prisoners, the guards, and the warden.  To make things worse, a prisoner with more power than the warden has a bone to pick with Bucky.  Its a classic story of a good guy wrongfully imprisoned in a crooked jail.  Rough times ahead for Bucky for sure.  Steve is doing everything he can to get Bucky released, but his current position in the government leaves him at the mercy of the legal system.  On top of that, Steve is struggling with the notion of once again becoming Captain America.

At $4.99, some readers may complain about or even shy away from this issue; but in all honesty, you get much more than what you pay for with this book. 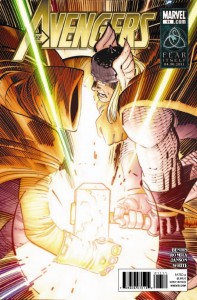 Parker Robbins, the Hood, has three Infinity Gems in his possession.  When he finds the remaining three, he will have control of the Infinity Gauntlet.  The Avengers and the Illuminati are doing everything in their power to stop this from happening.  Unfortunately, they know their chances of stopping the Hood are worsening by the minute because of the arrival of Uatu, the Watcher.

I want to preface this by saying that I am actually a fan of Brian Michael Bendis.  He has proven that he understands the scope of the Marvel Universe.  In Bendis’ world, things eventually make sense.  As a continuity nut, I strongly believe that all writers should be aware of what is going on in other books so that the stories can make sense when they are read in succession.  Bendis, as far as I can tell, does his best to respect continuity.

That said, I think Bendis’ storytelling fell short here.  The writing featured the narration of Uatu, which in my opinion took away from the characters.  There is character dialogue, but its briefy compared to previous issues of the Avengers.  Uatu’s narration seems unnecessary and even repititous at times.  Despite this, the story did progress.  Alot actually.  The Gems are basically all found.  There were some nice fights.  And best of all, there was a great twist at the end, which I won’t ruin by mentioning.  I will say though that there better be a good explanation to this twist, otherwise my opinion of Bendis’ respect for continuity will be lessened.

The art for me was also an issue.  I am usually a fan of Romita; I think he draws a lot of the characters we know and love very well.  But he whiffed on the Watcher.  Uatu looks like he ate 36 donuts prior to showing up to “watch.”  The lower half of his face is so fat, he looks like someone I’d see at a dive bar rather than a cosmic entity.  I really don’t get why Romita went this route; Uatu is usually draw with a small neck and huge head.  Instead, we get no neck, chin rolls, and a small forehead.

The last thing I’ll say is that I enjoy the story arc.  Its a nice homage to the classic Marvel Infinity stories and this issue certainly sets up nicely for the next chapters.  If you were a fan of the 90s cosmic stories, you’d probably enjoy this.